Truth be told, the Bass Family’s first products had nothing to do with pork. Ralph Bass first tried his hand at tobacco farming in the early 1950s.

That may strike you as a strange start to making sausage, but by the time his mother had blessed him with her recipes in 1956, he had developed some very good habits from handling tobacco. Habits like being patient with the leaves, watching their growth and choosing only the best for sale.

So when those two qualities hit a conjunction–his mind for quality and her gift for cooking–well, something truly special was created. They both knew it as soon as it hit their taste buds–this was a better way to make sausage. This was what they should do with their lives.

People agreed. By the 60s, word was out all over eastern North Carolina that some delicious, whole hog sausage was being made right here in Spring Hope. Demand grew faster than weeds, but Ralph Bass kept to making only 100-lb batches, and insisted on tasting every one. And they didn’t have access to chemicals and the like, so he stuck with only all-natural, high quality ingredients. He was creating the standards for Bass Farm that still exist today.

But with the demand came growth, of course. A bigger plant. More people coming on to help out. And Ralph noticed, as the years tumbled by, that a funny thing was happening with these people. They weren’t going anywhere. When people came to help, they stayed. They became a kind of second family to Ralph and Florence and their family.

Fellows like Doc Gupton, who worked on the construction of the plant, and when that was done, became Bass Farm’s first security guard and night watchman. Doc tended to take this latter role seriously–when told by Ralph to shoot at anything that came near the plant, well, he shot up the sheriff’s car one evening when he drove up.

Nowadays Bass Farm is still run by the family–and all those extended family members that just won’t go away (thank, goodness). So that means you can still count on Bass Farm for the tastiest sausage and pork products, delivered fresh every day.

It’s down-home goodness, from our home to yours. 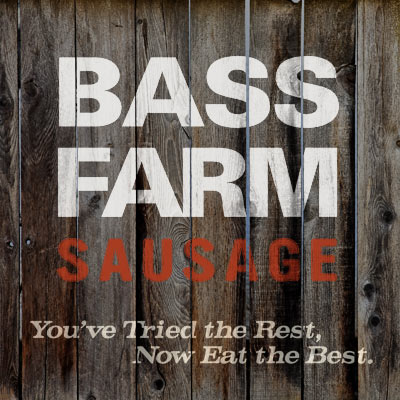